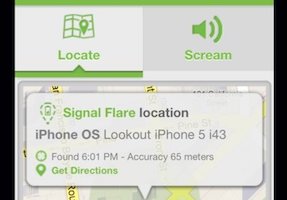 The mobile security app maker Lookout has come up with something very unique and one of its kind, at least till date! What humans do when they are lost? They tend to signal others to have their location being traced. On similar grounds Lookout has released a technology in which a phone sends a signal about its location. What new in that? It does it at the moment it’s about to go dead; battery over!

Company’s analysis has shown that most of the phones that get lost could not be recovered because after some period of time they lose their battery. Taking this into consideration, Lookout has added a feature to its security app. with this feature, the lost phone will send a signal to the telecom service provider as soon as it is about to lose its power. Simultaneously it will send a mail to the owner about its last location as well. It is kind of last words from the phone, similar to S.O.S. facility.

The feature is highly appreciable and is now available to both android and iOS version of the Lookout application. Only ‘lost’ phones can be traced with this feature as it’s obvious that the stolen phones will be on a move and might not discharge ever! This is probably the best feature of Lookout since its inception.