Are you suffering from nomophobia! 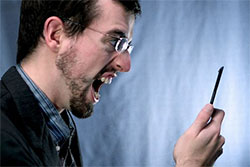 We all keep our phones near to us; obvious reason because it’s a mobile device. What is the point in walking up to a distance to attend it? Point to be taken!

But do you take your cell phones to shower or use them every second of the day or are highly worried about them being discharged after sometime? If the answer if yes, you might be suffering from nomophobia!

A recently coined word – “no-more-phones” or nomophobia, represents those people who are obsessed with their phones and are worried about it being lost. They can not separate themselves from their phone because of some virtual threat they have made in mind and this makes them carry their phone with them everywhere. Prominent conditions in nomophobia are

1. Panic attack in case of being separated from the phone.

3. Carrying multiple phones to stay in connectivity all the time.

4. Getting isolated from the society, Peers and family but being active on the phone always.

Any or all these conditions in anyone hint of them being suffering from ’no-more-phone’ syndrome. A research has suggested that almost 66% of users suffer from nomophobia. There are societies that can help people walk out of this non-medical issue and bring their actual life back.