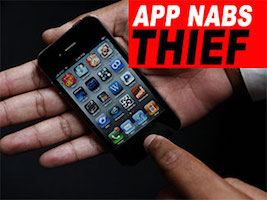 In an amazing incident that happened near Hollywood, robbers were caught using an iPhone app. iPhone has an app named’ find my iPhone’, which can track any other iDevice. Near the Hollywood area, there were four robberies in very short span of time. Both residents and police were on their heels to track any unwanted situation and stop any more incidents. There were many articles like wallets, Phones and watches that were stolen and one among them was an iPhone (this one brought them bad luck). A local resident of the place who was using the iPhone helped the police in catching the thieves.

Resident was avid iPhone user and knew that the in-built application can trace the device. He used his own iPhone to track the lost phone and the application provided him with the location of the phone. Police routed this location to its other units and with the help of a helicopter and after about two hours of chase the robber’s car was captivated.

iPhone has security in-built which works till the time phone is connected to internet. The application provides location based on GPS to any other iPhone device. Though the feature is age old still many people can not use or are unaware of its existence. Police team was thankful to the resident for helping them find and nab the racket.